Archives, Entertainment, Travel
Disclosure: I received some free/discounted
accommodations and attractions while in Nashville for review purposes here on
the blog. Opinions are, as always, my own.
In case you missed the rest of the trip:

Nashville Day 3: Country Music Stars Tour of Homes, Opry Mills Mall and Grand Ole Opry
When booking our Nashville vacay, we had the option of flying home fairly early Sunday morning, but
since I hate losing sleep as well as being rushed, I booked a 6:50 pm flight
home, which was very strange for us, as we had all day Sunday to kill without any set plans.

Our fantastic hotel (Hotel Indigo) gladly put our carry-on luggage in a storage room for us to retrieve before our flight, and we headed for a delicious buffet breakfast at Puckett’s. From there, it was a short walk to the historic Ryman Auditorium, the “Mother Church of Country Music”, former home to the Grand Ole Opry. 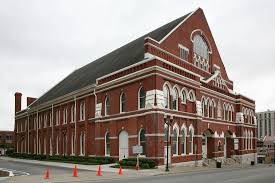 Visitors begin with a quick video before embarking on a self-guided tour throughout the auditorium. Other perks are available for an additional cost: you can stand centre stage at the Ryman for a photo op, go for a backstage tour, or even record your own CD in their recording studio! The gift shop is where we picked up another souvenir for our girls: Taylor Swift’s “Journey To Fearless” DVD – a live recording of her first headlining concert, intermixed with all sorts of home videos and interviews that show Taylor’s musical progression from a very early age. (They loved it!)

Since we still had time to kill, we decided to take a stroll up 1st avenue (the North/South streets downtown are all numbered, which makes for very easy navigation) and check out the waterfront, which is a beautiful area. Now, the water itself is a bit murky, but Riverfront Park is lovely, and we continued up to the Public Square which also gave us a lot to see, before returning to Hotel Indigo to collect our belongings and head to the airport (which is SO much smaller than Pearson in Toronto…we whipped through security in minutes and were at our gate with tons of time to spare. I couldn’t get on WiFi, so instead I sat down to start drafting all of these travel posts!)

Some additional notes about our trip to Nashville:

Transportation: We decided in advance that we would splurge for cabs when
leaving the downtown area, figuring it would still be cheaper than renting a
car and paying to park. In retrospect, it might not have cost us much more money – if
any – to rent the car, since so many of the main attractions are outside
of the downtown (for us, Belle Meade Mansion, Bluebird Café, etc. were all cab
rides). There is a flat rate fee of $25 for any cab trip within the triangle of
airport/downtown/Opryland, so it also depends where you’re staying and where
you plan to spend most of your time. It’s also important to chunk your days by
area (we went to the Opry Mills mall the afternoon before our Grand Ole Opry
concert, for example, rather than taking two separate trips to the same area). There were always a couple of cabs waiting outside our hotel and some of the attractions, but we did have to phone and wait after a couple of outings.
Tipping: We eat out a fair bit (okay, a lot) and I know what the going rate is for tipping restaurant servers, but I’m lost with other providers. With the cab drivers, I rounded $25 rides up to $30 most of the time which I hope was adequate, but then there were all of our tour guides/tour
bus drivers, and the people at the hotel (housecleaning, etc.) What’s appropriate? (I’m really asking, if anyone has thoughts to share I would appreciate it!)

Weather: The early August weather was lovely and warm, and felt pretty much like our nice summer
days at home (high twenties/low thirties).

Oh, and one last thing (actually two last things), the maps that really helped us:

If anyone has any questions about our trip I would be glad to answer them! Now I promise to move on to other topics here at This Mom Loves!

When her husband withdraws into himself, keeping a

Milestone alert!!! One year of Tamoxifen down, fou

If you’re looking for permission to make time in

Dark Roads by Canadian author Chevy Stevens was in

Have you heard of @takethegoodchallenge? They’re

QUESTION: Does listening to audiobooks count as re

Before reading Nothing But the Truth by Marie Hene

…and boosted! (Third dose courtesy of a mom from