In addition to about 20 magazines (they are my motivation for the treadmill), I read three books over the March Break:

{Note: it didn’t really take me this long to write the post – I had to hold off on publishing it until closer to the release date for one of the books.}

Confessions of a Public Speaker by Scott Berkun 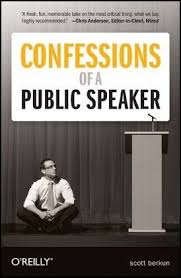 Recommended on Twitter by Kathy Buckworth, I was hoping this one would have general tips about speaking, but it’s actually geared more towards those on a professional speaking/lecturing circuit. (It’s also a bit scholarly – there are footnotes, people!) I did pick up some good ideas though, and the anecdotes about the author’s own speaking experiences are entertaining.

Everybody Has Everything by Katrina Onstad

This Canadian choice was also a Twitter recommendation (Cityline’s Tracy Moore tweeted out one Saturday that she had spent the afternoon reading by the fire, so I asked what she was reading, and it was this). While the bare bones of this plot could go into chick-lit territory (infertile couple inherit friends’ child after car accident) Onstad would never let that happen, and there is nothing light and fluffy about this story. It is heavy stuff…I actually felt physical pain several times as I read it (the anguish related to marriage, parenting, work, friendships). But Onstad is an incredible writer and I would definitely recommend it.

Don’t Lick The Minivan and Other Things I Never Thought I’d Say To My Kids by Leanne Shirtliffe (release date: May 2013)

Note: Leanne Shirtliffe is a fellow (and much better known) Canadian mom blogger, writing  at Ironic Mom. Check her out, and tell her I sent you! (She doesn’t know me, but she will then.)

Lean In: Women, Work and the Will to Lead by Sheryl Sandberg

As a mom with paid employment outside of the home (was that politically correct enough?) this book is eye-opening and motivational in regards to the status of women as leaders in the work force. As many readers and critics have noted, not all women want to “Lean In”, and many are not only content but actually very fulfilled in a non-leadership role at work (just as many women are fulfilled at home full-time with their children) but I enjoyed the book and the glimpse into the life of the mom of two and COO of Facebook.

My most recent read was:

The Honest Life by Jessica Alba

I’m not embarrassed to say that I am a junkie for books by celebrities, but this one is less an autobiography than it is a how-to book for living a greener, healthier life. (Purchasing products from Jessica’s “The Honest Company” is of course strongly recommended, but she mentions many other brands too). I’m going to be blunt and say that I am too lazy and/or picky to follow a lot of the tips, but those who are passionate about this type of lifestyle (with your food, home, fashions, etc.), especially those with young kids, will love this reference guide. Lots of colour photos of Jessica, her family and home as well.

2 comments on “This Mom’s Recommended Reading”

It’s a day to celebrate! 🎉 Year 3 of Tamoxife

Someone opted out of the matching PJs but still ma

🎶 Tidings of comfort and joy 🎶

This beautiful centrepiece was an early Christmas

Yes, I was outside in the winter voluntarily…and

This morning I had the privilege of presenting to

“Teachers, be bold and brave. Influence from the