I’m not a laugh-out-loud kind of girl. When I first started going to the movies with my husband, he used to think I didn’t enjoy a film if he didn’t hear me laugh. To his surprise, I could find something hilarious, yet never let out an audible chuckle. Reading “I Love Your Laugh: Finding the Light In My Screwball Life”, by Jessica Holmes, I actually burst out laughing several times, starting on the first page.

Known for her comedy (The Holmes Show, Royal Canadian Air Farce) and most memorably her impressions of icons such as Celine Dion and Liza Minelli, Jessica Holmes can now add book author to her resume. She is also the mom of almost four year old Alexa and two year old Jordy.

Jessica and I recently chatted about the book, her career, and her absolutely complete family.

This Mom: On the book jacket, you are described as “comedian, actress, writer, speaker”: which one of those do you identify with the most?

Jessica Holmes: I would say I’ve always been a writer, so definitely that one.

TM: When did you first feel like you had made it as a “celebrity”?

JH: You know what, I felt like I had made it the first time I did a twenty dollar acting job, but it wasn’t until I was a guest on the Mike Bullard Show that my parents were like “Oh, you’re an actress!”

TM: Looking back now, why do you think The Holmes Show {Jessica’s sketch comedy series} was cancelled, despite its success?

JH: {Short off-the-record comment, ending with}: Let’s just say I was heartbroken about that.

TM: You mentioned Peterborough several times in your book {her grandparents live there}, which is a city close to my heart as well. What memories do you have of visiting Peterborough?

JH: We used to go for Easter egg hunts in Burnham woods, and it was hilarious, one year my family forgot to even take the eggs out of the car. Everyone thought someone else had hidden them, so we searched for an hour in the snow. We also used to go for picnics at the dam, and a lot of walks at the Peterborough Zoo. {Amazing FREE zoo, for anyone who’s interested.}

TM: Have you had any interesting reactions from people you mentioned in the book? {Jessica lets it all out: family, friends, exes, you name it.}

JH: No, anyone that I hadn’t asked permission of, I changed their names, so hopefully I put out those fires. What shocked me is I got a really bad review from a website called “Guys’ Reads” or something like that. I just happened upon it accidentally, and the guy said he wanted to kill himself halfway through reading the book, it was so bad. And I feel like “Dear, it’s a pink cover. Don’t call it Guys’ Reads!” It’s not necessarily relevant to the men out there! {I agree, it’s not a book for guys. It actually has a bit of a ‘you had to be there’ kind of feel, but if you’re a woman in the same age bracket you have been there, if that makes sense.}

TM: Something I didn’t know about you that I learned from your book is that you spent some time as a Mormon missionary, living for 18 months in Venezuela. What do you think you took away from that whole part of your life?

JH: I took away how good service makes a person feel. It was so wonderful to just give my life away for a year and a half, and I have to remember now, when I’m feeling down about something, to be good to other people and that’s the quickest shortcut to happiness, I think. {Jessica has since left the Mormon church, and she and her husband Scott consider themselves Unitarian.}

TM: Jenny McCarthy was on Oprah recently and she was talking about how you can invite a comedian over for dinner, and you expect him or her to be the life of the party, cracking jokes and entertaining, but really comedians are real duds in those situations. Does that apply to you?

JH: Really, I’m only funny when I’m on stage. I feel like I have two or three performing hours in me a day, and the rest of the day I’m just practically dead and recuperating, a walking zombie! Part of it is that I’m an introvert, but I happen to do comedy for a living, so I’m able to drum it up for a few hours a day. It’s hilarious to me when people come up to me, when I’m just shopping or going for coffee in my pyjamas or something, and they’ll be like “you’re that girl! Do Celine! Do Liza!” And I’m like “Oh my God, it’s seven in the morning, I’ll be wiped out all day, I’ll have to go have a nap if I do Liza! I don’t know how Liza does Liza!”

TM: Speaking of napping, you have a son and a daughter: Have you seen any differences so far between raising boys and girls?

JH: I would say the big difference is with my girl I have nervousness around a lot that she does, because I feel like ‘oh my gosh, I want her to avoid the pitfalls of womanhood’, and with my boy I just kind of have an easy time because I don’t have those same fears with him. But I can tell anyone who had girls, wanted boys or had boys, wanted girls, I can just say I promise you, you love them both. I did have that worry, having one of each, I thought ‘I’m used to a girl, what do I do with a boy?’ and now he’s our little monkey.

TM: Do you see any more kids in your future?

JH: Never! I sort of feel like I’m going to give the best of me to the two I have, and quite frankly I can’t always even give them the best of me! My husband and I are both the babies of our families and we agreed, we are not cut out for more than two kids! {This next part I’m sure was added just in case she was insulting me} I’m envious of anyone who has more than that, though! {I assured her that I think two kids is just right for many families, ours included!}

TM: The one thing I wished for after reading your book is that there had been a lot more about parenting. Your writing is so honest and funny; I would have loved to read more about your experience as a mom. Perhaps the topic of a future book?

JH: So many of the chapters have opposing themes, and I want to see which one gets the most reaction from readers, and I’m hoping that the editors will get me to write something about that. I thought it was really fun writing about in-laws. Not just fun, but useful, because most if not all of my girlfriends were in the exact same boat as me. My mother-in-law was wonderful enough to give me permission to write this chapter {where Jessica is extremely open about her initial conflicts with her husband’s family} and so I feel like that might be the most important one to follow, but if people aren’t in to that I’ll write about something else. I just loved writing a book. It’s a perfect job for a mom. {By the way, I myself have never had any difficulties with my in-laws whatsoever, so frankly I don’t know what she’s talking about. In all seriousness though, I would love to see a motherhood book next from Jessica, so please take note, editors!}

TM: What’s next for you, career-wise? Any messages from your “inner muse” {an important character in the book} lately?

Alexa and Jordy (must be laughing at one of Mommy’s jokes)
JH: Oh, gosh, I still keep having ideas for TV shows that I like, so now I just have to get other people to like them! So I have a few things in development, so hopefully this time next year I can make some announcements.
TM: Comedy sketch shows?
JH: Yeah, I’d like to do a special, and I’m also pitching a reality series.
TM: Now, my standard concluding question: how would you complete the sentence “This Mom Loves….” ?
JH: I love my new anti-rosacea moisturizer! I have issues with an incredibly red face. I have a tropical fish aquarium, and I just love my nemo fish. I also love getting back to nature. We downgraded from a cottage to a trailer, and that means that we can actually enjoy ourselves instead of doing work when we go to the lake. I’m proud to say I love my trailer! 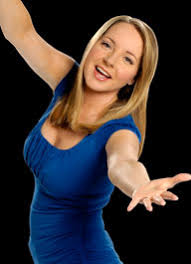 “I Love Your Laugh: Finding the Light In My Screwball Life” is available now in bookstores and online. You can also find out more about Jessica on her website, http://www.jessicaholmes.com/, or visit the official Jessica Holmes Facebook Page.

The grownups had a nice dinner out tonight and we

Today: Belfast! We chartered a van to take us to N

The Stone Bridge at St. Stephen’s Green in Dubli

I was very happy with how yesterday’s webinar wi

A lovable heroine and a murder mystery involving c

Registration for my free webinar is now live - lin