Nia Vardalos’ new book, “Instant Mom”, is about adoption. But let me be clear: it is not just about adoption. It’s more of a hybrid parenting/humour/autobiography-she-didn’t-want-to-write type of book. And you should read it.

I mean first of all, the woman is fun-ny. While I sobbed at several parts (when her daughter first calls her “Mommy”, for example), Nia’s trademark self-deprecating humour is everywhere: (“I don’t want to get airtime by making a sex tape with someone in celebrity rehab. I mean, not right now.”)

And while Nia asserts that she did not want to write an autobiography, the references to her projects (you may have heard of a little movie she wrote and starred in called “My Big Fat Greek Wedding”) and some name-dropping (you know, Tom Hanks, Queen Elizabeth, whatever) are actually great vehicles for drawing readers in, and spreading the message about her path to motherhood.

In 2008, after several unsuccessful rounds of IVF and some false starts with the adoption process, Nia and her husband, actor Ian Gomez, adopted an almost three year old girl from the American foster system – a system surrounded in many myths that Nia debunks in the book. For example, many of these kids are, in fact, available for adoption: there are 129,000 children in foster care who are legally freed from their biological parents and waiting for a permanent home. She also discusses the misconception that kids from foster care (even those who come from backgrounds of abuse) are “damaged”, pointing out that she has met many who are well-adjusted and successful adults.

Now, please be clear: Nia is not an “adoptive mom” – she is a mom. A protective mom, who has kept her child away from paparazzi (they used a kitten disguise when she was younger to foil the attempts of photogs trying to get a good shot) and is only now releasing the name of her daughter (Ilaria, who today is almost 8). This Mom sat down with That Mom for a Momterview.

Nia’s Canadian-ness shows through right away when she apologizes for being two minutes late (with a very good excuse), and after I tell her how much I loved the book (because gushing is exactly the way professional journalists do it) we get to the questions.

This Mom: You write about really personal topics like infertility, IVF, and adoption and recount some of the insensitive or even accidental foot-in-mouth things that people have said. For well-meaning people out there who really just want to express interest or show support to a friend going through something like this, what can they say or do?

Nia Vardalos: I remember a friend saying this to me: “I hear you’re going through something” – she didn’t use any words – “If you ever want to talk about it, please call me.” That really stayed with me because it was open, she didn’t even make me blush, it just made me feel very loved. And in the book I talk about a friend who quietly placed a prayer card in my hand. So kind. And she whispered in my ear “This worked for me”, which I just thought was so lovely. And the day that our daughter’s adoption was finalized, I sent the friend, Donna, flowers with the prayer card in the middle of it.

This Mom: Without giving too much away, in the book you write about an error that was made by an embryo specialist, and how he apologized and actually put it all in writing, which is a bit of a surprise in today’s litigious society. What did that mean to you?

NV: It meant to me that his soul was seeking forgiveness and he had no fear of retribution, he just knew it was the right thing to do. In him reaching out that way, I realized that the right thing to do would be release him of any guilt on his part, and I felt light. I felt as light as a I feel with the book.

I’m terrified to go public, terrified, and yet I just pre-taped the Katie Couric show {That Katie is always snagging my guests first!} and just to say my daughter’s name out loud in that setting…I was shaking. In fact, Katie said to me on the break “You’re sweating”, and I was – on my upper lip! {Nia’s upper lip sweat is basically a character in the book.} My heart was pounding. I don’t get nervous about performing, I’ve met the Queen, I’ve hung out with Elton John, nothing makes me nervous. Yet, the protectiveness I feel toward my daughter is the only thing that can make me rear up on my hind legs like a mama bear!

TM: You wrote a great chapter on “Mother Nurture”, since of course parents who adopt know that they can’t credit – or blame – their own genetics when it comes to their children’s qualities. Can you elaborate on some of the traits that you think Ilaria gets from you and your husband?

NV: The strangest thing happened recently, and it’s not in the book, I’m giving it to you. {Take that, Katie Couric!} So, our daughter has never seen us act, it’s not like we do sketch comedy in our kitchen, even though it’s a pretty funny house, she’s never seen our movies or seen us in plays, nothing. Of course we sing all the time, but a lot of parents do. Well, she just performed in a local theatre production of “Little Shop of Horrors”, and the kid has it. I know all parents think their kids are talented, but my friends and I – our jaws were on the ground. I looked at my friends – Rose, Tracy, the Core I talk about in the book – and I said “This is what our moms felt when they looked at us! They said ‘When did you rehearse? When did you learn this? How were you able to do this?'”, and they agreed, they remembered that. I remember my mom saying to me “How did you do that?” and I’d say “I don’t know!” and it was fun. There was no pressure, I wasn’t precocious, I was just very comfortable on stage, and I just saw my daughter be the same way. That’s not nurturing, that’s not nature, I don’t know what it is! Is it in her DNA? Again, is it just the match made in heaven? We don’t know!

TM: Being Canadian myself, I’m wondering if there are any particularly Canadian traits or traditions that are part of your family life with your daughter?

NV:  Well, we celebrate two Thanksgivings, we do things like that. Definitely manners and politeness. My husband is a New Yorker so he cringes when I open a cab door in New York and say to the driver “Are you for hire?” Yet, he now sees our daughter, when we leave a store, turn to the shopkeeper and say “Thank you!” and realizes that manners go a long way. You never really worry if you’re doing the right thing or the wrong thing, you just know if you have a good foundation of manners you’ll be comfortable in any situation. And of course, the thank you note. She writes thank you notes.

TM: You write about the fact that no matter how hands-on many modern fathers are, moms seem to always take the responsibility for the planning and scheduling of children’s activities – why do you think this is?

NV:  I don’t know if it’s because we are able to multitask…I know that sounds sexist, but I have seen my husband flummoxed when he has to answer the door while carrying a beer and our daughter in the other hand. I see him like “What should I put down first?” “Um, the beer!” 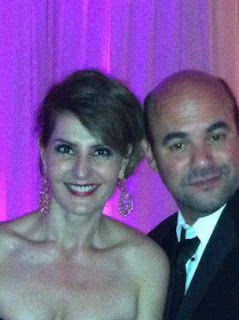 TM: In the book, you advise that when it comes to parenting, “Don’t make everything a teachable moment”. Can you elaborate on that?

NV: I think I learned that in my relationship. My husband has become a very good listener. At first in our relationship, when I would complain to him about a work situation or a friend that had said something, he wanted to fix it. And I would say to him “I don’t need you to fix anything, I need you to listen.” And that was such a lesson for the two of us because as I articulated it, it became clear to me and that’s what I use for my daughter. She will pour out angst over a situation, all sorts of things, and I’ll ask her, “Do you want me to do anything?” and she’ll say “Nope!” Sometimes she says yes, she does want me to do something, but it never is about me. It’s about her realizing how she feels as she articulates it. She’s a talker.

TM: You write in “Instant Mom” that you always buy yourself a piece of jewelery to celebrate the signing of a contract for a project. I’m curious to know – what did you buy yourself to commemorate this book?

NV: I have a beautiful black onyx ring on my right hand that is on the cover of the book.

NV:  This mom loves purses. I love kindness. I am generally attracted to a person who commits random acts of unwarranted kindness. If I see someone on the subway reach out and help an elderly woman through a turnstile I gushingly want to be that person’s friend.

As we wrap up, Nia asks if we’ve spoken before, as my voice is familiar to her. When I reply that we have not, she says “Maybe we’re just supposed to be friends!” Since that moment, I have been referring to her as “my friend Nia Vardalos”…and will continue to do so until her lawyers request otherwise.

“Instant Mom” is being released tomorrow, so look for it in your local bookstore or order it online now. You can also follow @NiaVardalos on Twitter for more information or just pure entertainment.

As for the book, if you’re thinking about adoption, there’s a fantastic “How To” Appendix at the back with tons of information. If you have adopted, you will no doubt relate to a lot of what Nia says, though of course no two families have the same experience. And if your path to parenthood (or away from parenthood) is completely different, I promise you’ll still enjoy the read.

The last thing I want to tell you about Instant Mom: at one point in the book, Nia talks about getting support from her own family, writing: “And now that my mom is here, everything starts to get better.” I imagine that’s exactly how Ilaria felt about her.

After my breast cancer diagnosis, while awaiting f

When I was first diagnosed with cancer, before I k