You know her more as the latter than the former; an electrifying performer whose passionate proficiency on the beloved four-string amplifies the traditional East Coast sound for contemporary times.

It’s a signature sound that has resonated with world audiences through 10 albums, multiple gold sales figures and 27 years; numerous Juno and East Coast Music Awards; two honorary degrees (from Niagara University, NY, and Trent University) and an honorary doctorate (St. Thomas University); the Order Of Canada – and a reputation as one of Canada’s most captivating performers.”

The gorgeous musician married fellow fiddler Donnell Leahy (of the all-sibling band Leahy) in 2002, and is now mother to Mary Frances (6), Michael (4 1/2), Claire (almost 3) and Julia (almost 1). No word yet on whether she’s trying to compete with her mother-in-law’s 11 offspring.

I recently had the opportunity to chat with Natalie about her brand-new CD, “Cape Breton Girl”, as well as motherhood, house design, and her fashion fetishes.

This Mom: Do you think your music has changed since you’ve become a mom?

Natalie MacMaster: Yeah, I do. How? This is my 11th recording, and my mother said to me that the fiddling sounds more mature. It’s been about six years since I’ve recorded in the studio, and incidentally my oldest daughter just turned six a few days ago. I’m sure as you go through more of life’s experiences you’re able to get deeper into things, but as far as me being aware of how my music has changed, there was a day when I was completely devoted to my music, and now I am completely devoted to my children. Music is something that happens because of the good for them and the good for myself, as opposed to it being all about the fiddle. It’s not that way anymore. It’s changed. I haven’t gotten worse, my mother thinks I’ve gotten better. I think I’m just evolving.

TM: I hear you’re homeschooling your kids. How is that going?

NM:  It’s going pretty well. I’m a teacher, I actually have a teaching degree. I’ve never used it, ironically now I’m teaching my own. This is my second year, and I’m on the road now so I usually school my six year old and my four year old from 9:00 to 12:00, four mornings a week and it’s ever-evolving. 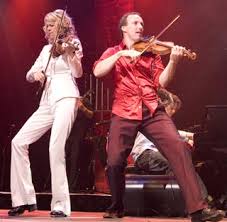 TM: You recently built a new house. What are some of your favourite features?

NM: Oh, that’s a good question. We have stone on the front of the house and I love that. Also the function of the house. We put our laundry room on the second floor – we have a storey and a half- and all the clothing, bedding and towels are there. It’s where we get dressed so it makes sense to have it there. It functions really well. I thought a lot about where to put the washrooms, so one would be accessible if the kids were playing outside, which drawer should the knives be in…and homeschooling, I took that into consideration as well. How to have homeschooling as part of my home, so I could put up the alphabet and things like that without it making the house look too much like a school. It’s an open concept so you walk in and it’s all right there, but this little room that jets off our main living space has all windows, so when you’re standing in the centre you just see windows, but when you actually go into the room and look back, that wall is covered with alphabet, calendar, kids’ art and all that, so you don’t see it unless you’re in there looking for it.

TM: I’ve already seen Mary Frances and Michael perform live with Leahy {the special appearances by the next generation always tend to steal the show}, and obviously they’re exposed to a lot of music at home. My own daughter stepdances and I’m curious to know how much time your kids spend practising each day?

NM: It varies. The only one really doing that is my six year old daughter. We started my four and a half year old son on the fiddle at age four, but he’s not really that ready for it. Not like our daughter was. So he’s just playing “Twinkle Twinkle Little Star” and plays maybe three times a week for ten minutes. The dancing is much shorter; maybe two minutes twice a week. He dances all the time and I don’t want to thwart his enthusiasm. He actually dreads me saying ‘Okay, Michael, try this’. He doesn’t like that at all, so I don’t make him very often. He’s just not ready for it yet.

Mary Frances does piano, fiddle and dancing, so she practises them all pretty much every day. Probably five days a week for half an hour each.

TM: Do you think there is one instrument that kids should learned before any others to give the best musical start?

NM: It all depends on the child and what they like. Start off with anything and go from there. I have no preference. I’m sure there are people who study that sort of thing, but my own opinion is play whatever they want. They have to start somewhere, and as they get older they may be drawn a certain way.

TM: I read that you went through a phase when you were younger when you were very nervous about being on stage. How did you push through that?

NM: I guess just by knowing that nervous energy is an energy and thinking of how to make it something positive. If you’re half asleep when you go onstage, that’s no good. If you’re nervous you have intensity running through your body. It’s mind over matter I guess. Prayers too!

TM: What do you want people to know about your brand-new CD, “Cape Breton Girl”?

NM: I want them to know that I very much like it, and it is what I hoped it would be. It’s very Cape Breton, which was the point, so it’s for the hard-core Cape Breton fiddle enthusiasts.

TM: And was that always going to be the title?

NM: No, in fact I was going to call it “Our Water Runs Deep”. I was convinced of that, and really liked the title. The reason why I changed it was because I was trying to find a title to suit the cover picture {see photo above}, and I could find all sorts of analogies about water running deep, like my roots, the blood runs deep, all of that. But the music on the record is so happy and light-hearted that to me the title didn’t match. Cape Breton Girl is a title I’ve had for a long time and haven’t used on anything, and it kind of resurfaced at the last minute after all the artwork was done.

NM: Well, the first thing I thought of was This Mom Loves tradition. I’m not just talking about the music. I love “traditional”: furniture, the way we live our daily lives, Christmas, holidays, anything. Other than that, more materialistic things…This Mom Loves being blonde. I guess that would mean highlights. Can’t get along without those. I do love shoes, and I like them with a heel. Nothing unique there! This Mom Loves the farm. The whole farming lifestyle. And I have a bit of a coat fetish. I love coats and jackets!

The new CD “Cape Breton Girl” is available now at your music retailer, through Natalie’s website or on iTunes, and would be a perfect surprise under the tree of any Natalie MacMaster fan. {The great thing about my family is that my 78 year old Grandma and 5 year old daughter would be equally happy to find this gem in their stockings…and they both just might!}

Natalie’s favorite place was also the theme of the book she put out last year, “Cape Breton Aire” which can be purchased online, at her live shows, and at some boutique shops.

﻿
Find out more about Natalie MacMaster on her website.

4 comments on “Natalie MacMaster: The Momterview”

#TBT to my first national education segment for ba

Wow - thank you to my friends @idaontario! While I

What a pleasure to have lunch and talk reading wit